We will never forget you, Teacher 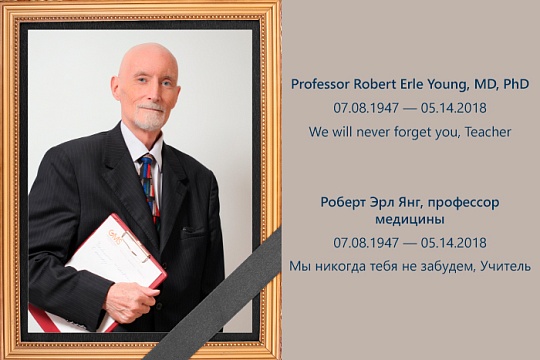 14th May 2018 we are overcome with sadness to report that our dear friend and colleague Dr. Robert Young has passed away. He was a legendary person; to many people here, he represented the very ideal of the American doctor. He knew everything a great family doctor needs to know, and much more: he had excellent surgical skills, was well versed in the nuances of emergency care, and had a deep knowledge and understanding of internal diseases. Dr. Young could easily take charge of an intensive care unit, or a pediatric ward full of newborns. In short, he could manage any difficult situation with the utmost in professionalism.

It was almost as if Professor Young was made for the medical world. Calm, wise, kind, soulful, and very smart and sophisticated, he worked with us side-by- side for many years. He came to Russia in the 1990s, where, at the time, the idea of modern Western medical care was only a legend. To use an analogy from another profession, Bob embraced both the spirit and the letter of the law: he was the living embodiment of evidence-based medicine, treating patients like very few other doctors knew how to, and he also had a magnificent library of English-language medical texts, which on occasion proved to be a great help to doctors managing difficult cases. All of us experienced a warm feeling of camaraderie working with Bob, and many of us formed long friendships with him. Bob knew how to work with younger doctors; in fact he loved working with them, instructing them, supporting them and helping them any way he could. And how his patients adored him! He held them in the same high regard. Even in his final years, as his health began to seriously decline, he would refer to his patients as «the dearest and most important part of my life.»

The last few months of Bob’s life were extremely difficult — he fought his illness bravely, but it took its toll, as his weakness and weight loss progressively worsened. He knew exactly what was happening but held his composure to the very end, staying positive, making jokes, smiling, and never complaining. In a way, he accepted his illness like any other challenge of fate, handling it with dignity. Fortunately, Dr. Young was not in pain during his final hours. He was calm and at peace. His discomfort gradually gave way to drowsiness, and he eventually slipped into a dream from which he would not wake. Rest in peace, our beloved Bob!

The application has been sent!

Thank! Your application has been sent successfully.
In the near future, our manager will contact you.

The application has been sent!

Thank! Your application has been sent successfully.

Request a call
Choose a specialist
Write to us